A “passionate and creative” Teesside University graduate who died earlier this year has inspired a challenge set in his memory for students by his former employer. 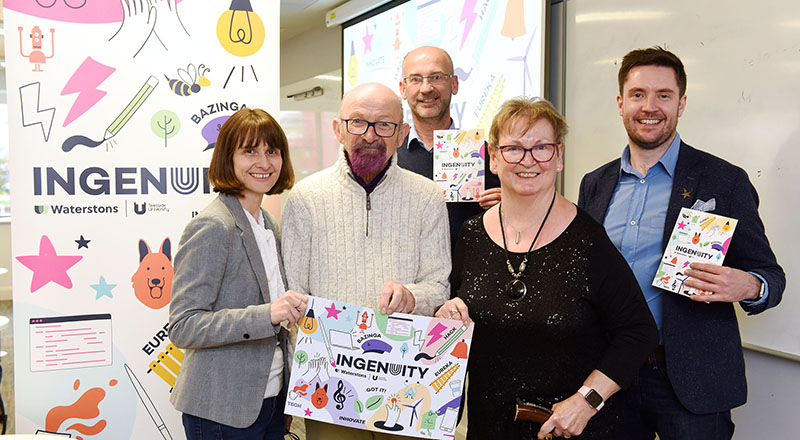 Durham business and IT consultancy Waterstons has invited School of Computing, Engineering & Digital Technologies students to take part in INGENUITY, created in memory of Richard Begg.

Richard joined Waterstons in 2013 as an executive software consultant, specialising in integration and software architecture, after graduating from Teesside University with a computer science degree. He went on to be promoted to Head of Bespoke Software. Sadly he unexpectedly died aged 45 in January.

Waterstons wanted to work with the University to launch INGENUITY in honour of Richard and as a legacy for his innovation and passion for nurturing people. Students have been set a challenge to use their skills, knowledge and research to find a way to inspire sustainability among communities.

The challenge winner will be announced during the University’s ExpoTees event in May. The winning team will receive £1000 to share, along with an opportunity for one team member to take up an internship, placement year or fast track through to Waterston’s graduate assessment day.

Richard’s parents Wendy and Rod, who were at Teesside University for the launch of INGENUITY, said they take great comfort in seeing how their son continues to inspire others.

Wendy said: “He was passionate and creative and had a real appetite for learning and ideas. Richard was always working, always creating something.”

Rod added: “He was so inclusive and inspired a lot of people. He would love this challenge which has been set for the students.”

They fondly recall some of his ideas, which ranged from numerous attempts to build a hovercraft, to creating a glockenspiel which would respond to tweets sent to Twitter and play a tune. “It was eventually consigned to the garage, as the glockenspiel would start playing at 4am because someone had sent a tweet,” said Rod.

We wanted to give students the opportunity to be just as wacky, creative and inspirational as he was.

Leanne Cullen, Waterstons Operations Director, said: “We wanted to work with Teesside University to create something in Richard’s memory, as it was where he studied and it would be something he would be proud of.

“He was a big advocate for innovation. His ideas and what he devoted his time and energy to are legendary within Waterstons, so we wanted to give students the opportunity to be just as wacky, creative and inspirational as he was.”

Daniel Halliday, Waterstons Associate Director for Digital and Data, said: “We want Richard’s memory to live on. We created INGENUITY to honour his legacy for innovation and nurturing people.

“This challenge gives students complete creative freedom and we hope that this annual event will showcase talent and create opportunities, that would otherwise not have been possible.”

Darren Abbott, Principal Lecturer (Enterprise and Knowledge Exchange), in the School of Computing, Engineering & Digital Technologies, said: “We are really looking forward to seeing the creative ideas that our students come up with, inspired by Richard.

“Students from across engineering, computer games and art and design disciplines have signed up to take part and we’re keen to see how they embrace creativity, art and technology, working together with students from backgrounds, as sustainability will mean very different things to each group of students.”

Study with us
Latest articles