International football superstar and Teesside University graduate Beth Mead has crowned a remarkable year with even more success after being named BBC Sports Personality of the Year 2022. 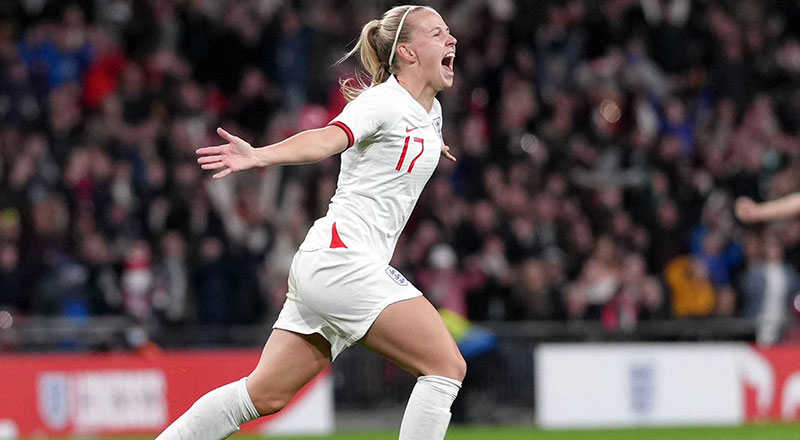 The annual BBC Sports Personality of the Year awards, which took place at MediaCityUK in Salford on Wednesday 21 December this year, recognise the achievements of the best-performing figures within sport.

Beth was announced as the winner of the event’s main category in recognition of her international sporting accomplishments and the impact of her success beyond the world of football. The England Women's Football Team were also crowned Team of the Year.

These latest accolades cap off a fantastic year for Beth, which saw her thrive at the European Championships 2022 with England’s Lionesses, winning Player of the Tournament and the Golden Boot as the team made history and lifted its first international trophy.

The Arsenal footballer scored six goals for her country at the competition, which added up to a record-breaking 20 international goals during the 2020/21 season.

Beth was also the runner-up in the Ballon d’Or Feminin, which recognises the best female footballers from across the globe.

She was later voted BBC Women’s Footballer of the Year 2022 by the public as a result of her outstanding success.

Beth, 27, from Whitby, studied BA (Hons) Sports Development at Teesside University and was part of the Elite Athlete Scheme, graduating in 2016.

Teesside University is very proud of all that Beth has achieved. She has had an incredible year and the many prestigious accolades she has received are extremely well deserved.

She has continued to work closely with Teesside University since completing her studies, launching the Beth Mead Scholarship earlier this year to support aspiring female footballers.

The scholarship is supporting four scholars through their studies, providing each of them with a bursary, bespoke support and training from a team of experts, as well as access to one-to-one mentoring from Beth.

Teesside University is also home to a special commemorative plaque, housed in the reception area of the Olympia Building, which celebrates Beth’s success and the University’s role in her development.

Professor Mark Simpson, Pro Vice-Chancellor (Learning and Teaching) at Teesside University, said: “Teesside University is very proud of all that Beth has achieved. She has had an incredible year and the many prestigious accolades she has received are extremely well deserved.

“We join the nation in congratulating her on being named BBC Sports Personality of the Year and look forward to seeing what comes next for Beth in what is already a hugely successful sporting career.”