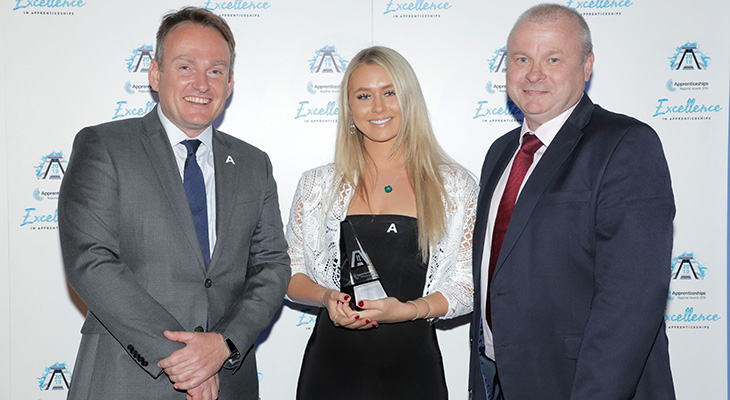 The 21-year-old from Darlington is combining her studies with working at engineering company Gestamp Tallent Ltd in Newton Aycliffe.

After picking up the plaudit at the ceremony at the Hilton, Gateshead, she will go forward to the national final on November 27.

The National Apprenticeship Awards showcase the diverse and growing range of sectors engaged with apprenticeships, whilst celebrating the achievements of outstanding apprentices, apprentice employers and individuals to inspire others to follow in their footsteps and champion apprenticeships across England.

Through her apprenticeship, Emma has mentored students at a local college and supported apprentice recruitment days for two years.

She said: 'I really wasn’t expecting to win so I am over the moon. Without a doubt, the biggest benefit I have seen from doing an apprenticeship is my increased confidence.

'From going into schools and speaking to leavers considering their career options to presenting my ideas to colleagues, I have been given the opportunity to develop my interpersonal skills – all thanks to my apprenticeship and my employer.'

I am constantly reminded of how beneficial it is going to be when I finish my degree to already have four years of work experience under my belt.

Emma added: 'I feel incredibly fortunate to have chosen the route I did. I am constantly reminded of how beneficial it is going to be when I finish my degree to already have four years of work experience under my belt. I still get to enjoy my twenties alongside gaining a degree and building my career four years earlier than everyone else.'

Emma is a member of the first cohort of CMDA apprentices at Teesside University Business School having started in the summer of 2017, with the school having subsequently recruited another eight cohorts, with intakes three times per year. The qualification was launched at Teesside University Business School in 2017 and upon completion, graduates receive a BA (Hons) Management Practice and full Chartered Management Institute (CMI) Chartered Manager status.

'Emma is a credit to Teesside University and to Gestamp and we wish her all the best in the national finals.'

More information about higher and degree apprenticeships at Teesside University