After completing a first degree and PhD, Andrew has had a successful career in chemical engineering. 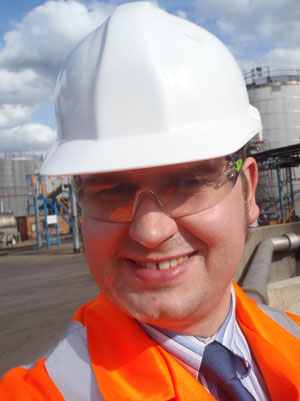 Chemical engineering has always been something that I’ve wanted to do as it allows me to be creative using my aptitudes (maths, physics and chemistry) to achieve an outcome that has a quantifiable significance by improving business profitability. Unlike many other professions, the significance of your work isn’t dependent on what a group of assessors/judges/managers think, it’s dependent on the improvement to the bottom line that you can show (which I think is brilliant).I decided to study at Teesside because of the facilities. The Orion building modules had a chemical plant feel to them (which reminded me of a summer placement at Fine Organics that I undertook when doing A-levels) with a distillation column running through three floors. This gave me the impression that Teesside University had more of an industrial focus next to other universities, which was the direction I was interested in.

I liked the course because I was good at it. The other big positives were the social life and the friends that I made.

What did you do next?

I completed my PhD, and then lectured in the School of Science and Engineering’s Preliminary Year, before going into industry as a Performance Chemical Engineer at Sembcorp. Here, I was the sole engineer responsible for the performance of Wilton 10, a £15 million per annum biomass power station that is the cornerstone of the renewable energy strategy for Sembcorp Global. My key achievement was researching and implementing a new boiler cleaning regime that reduced costs by an estimated £1 million a year. After my contract at Sembcorp finished, I took time off to prepare for the arrival of our first child before deciding to found Alpha Rose Engineering Ltd.