After graduating Phil moved to London and now works for BBC iPlayer as an Editorial Manager.

I had an amazing few years at Teesside. Everything I did led me to where I am now. 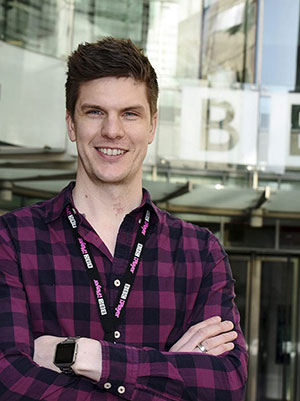 Tell us about your time at university

The classroom environment was superb – I was part of a particularly good group. I got on really well with all my classmates and I’m still good friends with a lot of them today. We would mainly hang out working in the labs, learning from each other as well as having a good laugh. Introduction to VR and Advanced VR really captured my imagination.I lived about 10 miles away from the University so being a local lad I knew the town well. I regularly stayed with friends on campus after a night out – the student nights were great!

Did you do any work experience or a placement year?

I took an industry placement year and worked at BT Exact in Ipswich. I had one of the best years there, working with friends from university and also making new friends. I enjoyed it so much that they employed me after I graduated. I stayed there for a year before moving on to London.

After leaving BT Exact, I moved to London to work for the BBC. 13 years later, I still work there and I have risen through the ranks. I joined as a system tester working on red button technology before moving into an editorial role. I worked on red button programmes such as a Doctor Who game, then I moved to BBC Music where I was a producer. I produced the red button coverage of Glastonbury and the other major festivals as well as Radio 2 sessions featuring Taylor Swift and the Mercury Music Prize.Not long after that, I moved up into the role of Senior Producer at Radio 1. It was pretty much my dream job, looking after the digital team, covering all digital and innovation aspects of Radio 1 and 1xtra online. I developed the website and pushed digital boundaries working on online games, support tools for young people and fun content for the Radio 1 and 1xtra audiences. I also continued to work on major music festivals, running the online coverage of Glastonbury, Hackney Weekend, Reading and Leeds as well as Radio 1’s Big Weekend for a number of years, responsible for content that millions of people were consuming. I now work for BBC iPlayer as an Editorial Manager. I manage a team that is responsible for all the BBC’s off schedule content – programmes that aren’t broadcast – that appears on iPlayer as well as all TV online supporting content, from Poldark to Saturday Kitchen.

Did Teesside University help you to reach your goals?

Yes it did – it was an amazing few years where I met some wonderful people. Everything I did led me to where I am now.