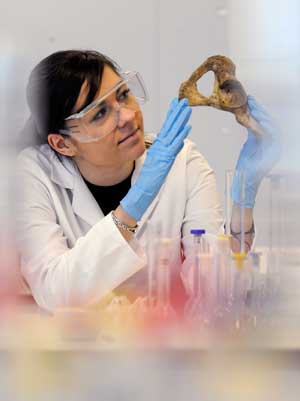 Forensic science is the study of scientific evidence to help the court in its investigation. It includes footwear prints, body fluids, bones, drugs and accelerants.Crime scene scientists are trained in how to collect and preserve evidence and we’re trained in how to analyse it. We do the hard stuff!I’ve always been interested in the idea of forensic science. I originally considered studying pharmacology as I thought it would be easier to get a job but, in the end, I decided to go with what I really wanted to do.I’m from nearby Yarm. I thought of studying further afield but what’s the point when one of the best universities for forensic science is on my doorstep.My degree is accredited by the Forensic Science Society – not all universities’ are.Now that I’m here – in my second year – I know without doubt that it’s what I want to do. The course is so interesting, I love chemistry and I’ll be making a difference in the long run. I think it’s how I imagined. My modules include analytical science, investigations in forensic chemistry, genetics and molecular biology, research methods for science. I’ve already planned my dissertation which will look at residual metals in tool marks – trying to find out what weapon caused the mark.I’m most interested in anthropology. Luckily I’m not squeamish and bones aren’t as bad as corpses. Much of the work is done in the lab, although there’s a chance of working in the field with an anthropology job.The labs at Teesside are perfect. It’s a very hands-on course and we get a lot of help with the equipment. I’m also involved in a summer scholarship programme – eight weeks’ lab work and a short report on collagen in bone. The experience will look good when I apply for jobs or a master’s. I’m most interested in studying an MSc Anthropology next to improve my job chances.I have 15 to 20 hours a week contact time and I work at home for about the same amount of time. It’s what I want to do so I’m willing to. I do get really stressed but I love it. I recommend Teesside University if you’re interested in forensic science. It’s hard work but I think it’s worth it.