Screenwriter and Teesside University graduate Jonny Grant is celebrating the release of his second feature film. 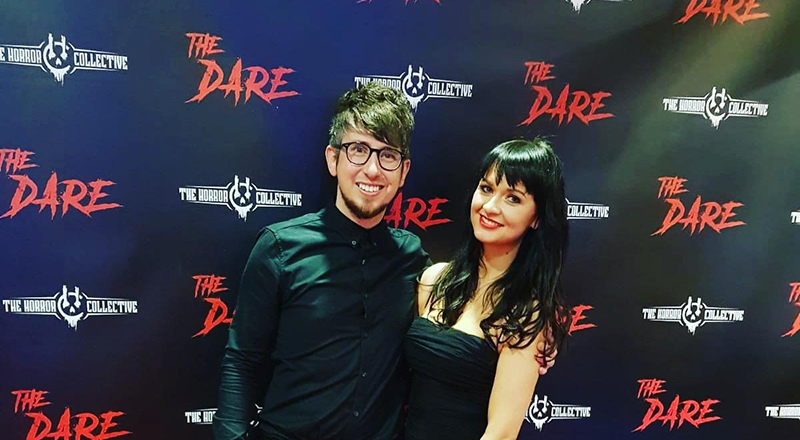 Jonny pictured with his wife Lina

Arthur and Merlin Knights of Camelot went on release this month and is available on DVD and Digital HD.

His debut film, horror movie The Dare, was released last year in America and Canada, with UK distribution planned for later this year.

Jonny wrote Arthur and Merlin Knights of Camelot with director Giles Alderson, after being put in contact through his agent.

He said: 'I got an agent back in 2012 and write film scripts in my spare time. I managed to get into contact with the right circles in the industry.'

Middlesbrough-born Jonny, who lives in Ingleby Barwick, said: 'My studies at Teesside University really provided the foundations on which I built my writing career.

'The creative writing course really opened my eyes to the many different kinds of drama and taught me about the importance of conflict, escalating stakes, sequence structure and character arcs.'

Arthur and Merlin Knights of Camelot is set in the year 463 AD and tells the story of a man battling to fulfil his destiny to become the King his nation needs.

I've now been writing screenplays for over ten years, and I'm not sure whether I would even had the confidence to begin if it wasn't for my time at Teesside

England is a land divided and King Arthur has been absent for five years. He must return home to face dark and dangerous threats from all sides, while guided by the legendary wizard Merlin.

Jonny added: 'I loved my English degree at Teesside, so when I heard that there was a MA in creative writing I jumped at the chance.

'I found the lecturers, Andy Willoughby, Bob Beagrie and Andy Ross so approachable, and always willing to give me and the other students their time. They just wanted to help their students learn. I loved their passion too.

'The master’s really developed the knowledge of drama I had gained during my degree. It provided more opportunity to put that knowledge into practice, and gave me a solid ground on which to explore my creativity, make mistakes at that early stage whilst being nurtured and guided.

'The lecturers also filled me with the confidence to attempt to write my first screenplay, and continue to keep writing.'

He added: 'I've now been writing screenplays for over ten years, and I'm not sure whether I would even had the confidence to begin if it wasn't for my time at Teesside.'

Find out more about studying English and creative writing

Teesside writer's second film is out
Evening Gazette, p.14, 29/07/2020
A screenwriter who learned his craft on Teesside is celebrating the release of his second feature film.