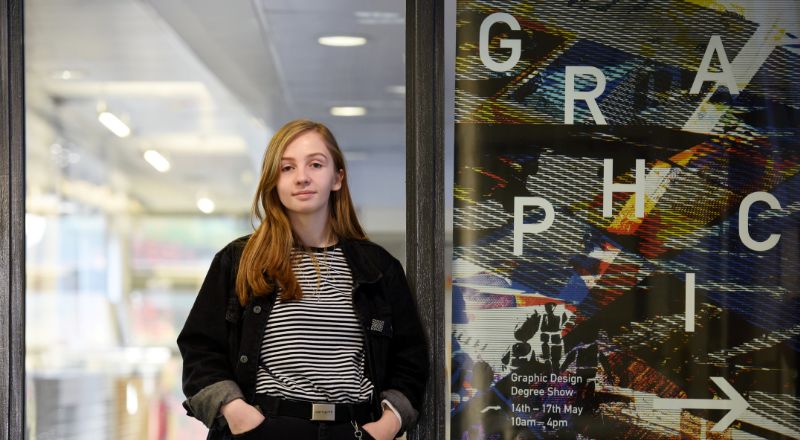 Keavey, 22, from Middlesbrough, designed a poster to encourage people to play their part in saving coral reefs, which saw her clinch third place, a bronze medal and $1,500 prize money as she competed against the best and brightest young creatives from across the world.

The fantastic result represents a record for the UK and Ireland at the Adobe Certified Professional World Championship, as it is the highest a British finalist has ever ranked.

Keavey said: “I am so proud to represent both my country and Teesside University overseas and reaching the highest achievement for the UK feels like first place in itself. Adobe is the industry standard, so to place third feels very prestigious.

“My entry was for a non-profit called The Ocean Agency, which works on the conservation of marine life and environments. The work had to engage an audience to act on saving coral reefs, specifically around Egypt's COP summit later this year in Sharm El-Sheikh. I decided to add coral elements to the main text to attract attention and stand out from other posters around.

“Going in, I was so excited to be travelling to do something creative and exciting. Of course, I was nervous to see other competitors’ talents and strengths, but I held my own enough to place well.

“Coming out, I had the joy of a day of stress relief in the Disney Parks - so I can't complain.”

Having graduated from Teesside University in July with a first-class honours degree in BA (Hons) Graphic Design with Marketing in the School of Arts & Creative Industries, Keavey feels proud to have achieved so much already in her burgeoning career as a graphic designer.

I am so proud to represent both my country and Teesside University overseas and reaching the highest achievement for the UK feels like first place in itself.

She added: “For now, I'm really looking forward to settling into my Junior Graphic Design role at Juiced Studios. A rest is on the cards after a busy few months – graduating, studying abroad in the Czech Republic and coming third at this World Championship.”

The training, offered in both Adobe and Microsoft, forms part of the University’s Future Facing Learning initiative, which works to enhance digital skills and improve employability across Team Teesside and beyond.

The University was also the first higher education institution in Europe to gain Adobe Creative Campus status in recognition of its commitment to promoting digital literacy.

She said: “The central mission of our school is to ensure that our students’ creative careers are transformed. To see a young person travel from their hometown in Middlesbrough to the USA and achieve success against competitors from across the world represents one of those moments.

“Every one of our students at Teesside University has access to career-enhancing digital opportunities. Massive congratulations to Keavey for her tenacity and boldness. We look forward to seeing her creative career grow from strength to strength.”

Andrew Lenehan, Regional Account Manager, Prodigy Learning, added: “Congratulations to Keavey; this is a momentous achievement and she has been an excellent ambassador for the UK and Ireland in the competition.

“Keavey’s success highlights the future talent coming into the creative industries in the UK and the Tees Valley and having the Adobe Certified Professional certification will help turbocharge her future career.”