A North East film production company, set up by a Teesside University graduate, has turned to local talent as it expands its team, looking to build on a successful 2015. 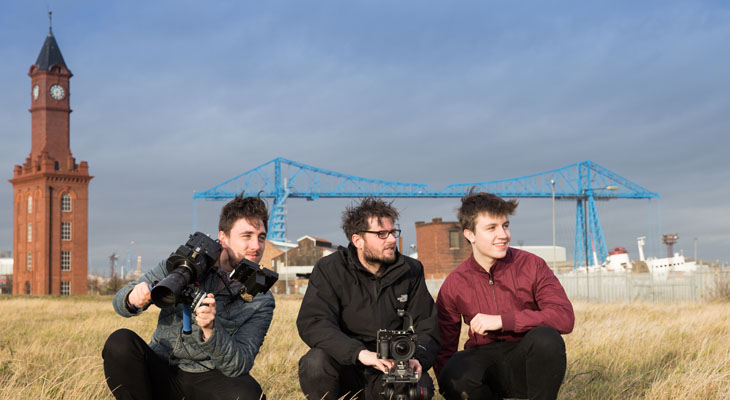 Ithica Films has appointed Connor Chambers and Jack Holmes as filmmakers, due to a growing client base and ever increasing workload.

The Middlesbrough based company was founded by Teesside alumni Matt McGough with the help of a Fellowship from DigitalCity, which is based at the University.

Ithica takes a modern approach to business filmmaking and employed its latest members after they both impressed while on internships.

Connor, from Bedford, graduated from Teesside University last year, having gained a 2:1 in Performance for Live & Recorded Media.

He said: 'Working at a company like Ithica Films is a fantastic opportunity and a dream come true.

'It is very rare for graduates to leave university and within two months have started working in their chosen industry. I learn something new every day and although a lot of pressure comes with the role, it only makes me strive to achieve more and impress myself and the people around me.

'I strongly believe that to be a success, you need to surround yourself with people who are just as passionate and able to test you every day. I have turned from an acting student to a professional film maker in 10 months due to the help of Matt and the team.'

Jack, from Middlesbrough, who has been taken on as an apprentice filmmaker, added: 'I haven’t had much experience within this industry, but I’ve always known it’s what I’ve wanted to do, so it feels great working with Ithica films.

'It’s a fantastic team and I get along with everyone, plus I get treated with a large amount of trust and respect, just like a normal employee would, so I really don’t feel like an apprentice filmmaker.'

The DigitalCity Fellowship scheme supports entrepreneurs to develop their digital business product or idea. As well as support with living expenses, Fellows are also able to access industry-specific mentoring and coaching along with facilities and equipment at the University.

Ithica Films enjoyed a successful 12 months last year, which included a move into a new office in June, choosing the chic Boho One area of the town as its base.

This was the first step towards the company’s expansion plans, as director, Matt McGough, knew having more space provided him with the potential to grow his team.

With this in mind, Matt was keen to offer any future opportunities within Ithica Films to local students and build on the company’s close links with Teesside University - something he regards as extremely important for the future of both his business and the North East.

Matt said: 'It’s important to be able to offer these kinds of opportunities to young people on Teesside, whether they come from here or have spent time here at the university.

'As the company’s director, it’s brilliant seeing the team expand as it’s what we set out to do and we also want to use the graduates and apprentices around us.

'It’s very satisfying to be able to do this and as we are hoping to create an industry around the region, it’s important we also create the opportunities for the people around us to get involved.'

Since its conception, Ithica Films has worked on projects covering a range of sectors including the NHS, Dental, Education, Kickstarter films, Engineering, Construction, Manufacturing and Training.