It took 18 years, but Joe Chidanyika has finally achieved his dream of becoming a Doctor. 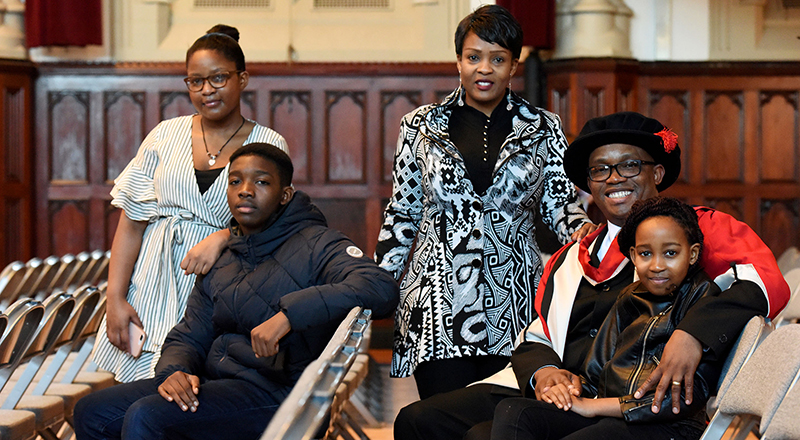 Originally from Zimbabwe, Joe moved to England in 1999 to study his Nursing degree at Teesside University.

A springboard for a successful career in healthcare, he then completed an MSc Public Health, graduating again from Teesside University in 2009.

Joe enjoyed roles at James Cook University Hospital as a Cardiothoracic Theatre Specialist and within Primary Care Trusts within the Tees Valley focussing on emotional health and well-being, as well as being the suicide prevention lead.

In 2013 he moved to Middlesbrough Council where he is the clinical lead as an Advanced Public Health Practitioner. Around that time he also started to study his Professional Doctorate in Health and Social Care back at Teesside University – which took him five years to complete.

Earlier this month Joe received his doctorate as part of the annual Winter Graduation ceremonies – bringing to an end a remarkable 18 year affiliation with Teesside University.

His wife, Locardia, who also studied at Teesside University alongside Joe when they both completed their MSc Public Health, was in the audience to see him collect his award. Also watching were their two children Tanisha, 8, and Sean, 14, along with their niece Kudzi Chinowata, 21.

Joe, 43, who now lives with his family in Darlington, said: 'I never thought I would get to this stage. It has been hard work and perseverance to finally receive my doctorate from Teesside University. It is an incredibly proud moment, not just for me and my family, but also for my employer, Middlesbrough Council, who supported me throughout my studies.

I want to be able to inspire other international students, as well as students from different backgrounds, to dream big and never give up on their goals.

'I never knew much about the area when I arrived, but since my first day at the University, I never wanted to leave. Teesside is a fantastic university. The support I received over the years from my mentors and supervisors and the opportunities I have been given, have paved the way for my success – both professionally and academically.

'It makes me incredibly proud to be able to inspire my children and my daughter has been telling me that she also wants to be a doctor just like me.'

Joe decided to study a Professional Doctorate at Teesside University as he is passionate about improving the health and well-being of people in the local community. He added: 'I received so much support from my family, my work colleagues and my academic supervisors at Teesside University.

'I want to be able to inspire other international students, as well as students from different backgrounds, to dream big and never give up on their goals. I would encourage all young people out there contemplating going to university to just do it - education is truly the passport to the future.

Doctorate caps off 18 year association with Teesside University
Middlesbrough Council, online, 12/12/2018
It took 18 years, but Joe Chidanyika has finally achieved his dream of becoming a Doctor.