A paid internship with one of Europe’s largest visual effects and computer animation studios is now available as a competition prize. 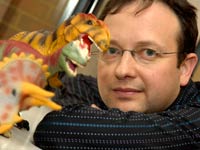 The University of Teesside’s international animation festival Animex is offering this prize in association with BAFTA winning Framestore CFC, based in central London. Their animation and effects are featured in a range of hugely successful films including Harry Potter and the Order of the Phoenix and Chronicles of Narnia. The internship is only available for those who apply to the annual Animex Awards competition. The Animex Awards are open to students who have made a frame by frame or computer assisted animated film, produced from 1 October 2006 to 1 October 2007. One selected entrant will be invited to undertake paid work at Framestore CFC for two months. The internship will give the winner an opportunity to see at first-hand what a film career in post production is like. The winner will also receive accommodation and travel assistance.Amy Smith, Recruitment and Human Resource Officer at Framestore CFC said: ‘I’m really looking forward to opening up our internship scheme here at Framestore CFC to applicants in this year’s Animex Awards. With feature films like Harry Potter and the Order of the Phoenix and Chronicles of Narnia under our belt our features department is always on the look out for new and emerging talent and I look forward to working alongside the Animex Awards team over the coming months.’Andy Lomas, Head of Computer Graphics at Framestore CFC will be one of the competition’s judges. Andy is a University of Teesside MSc Computer Aided Graphical Technology Applications graduate. He was awarded an Honorary Master of Arts degree from the University in 2004 and returned to Teesside again earlier this year as a keynote speaker at Animex. Applicants should send their work to the University no later than 1 October 2007. For more information and an application form, email Justin Greetham at awards@animex.net. More information on the Animex website