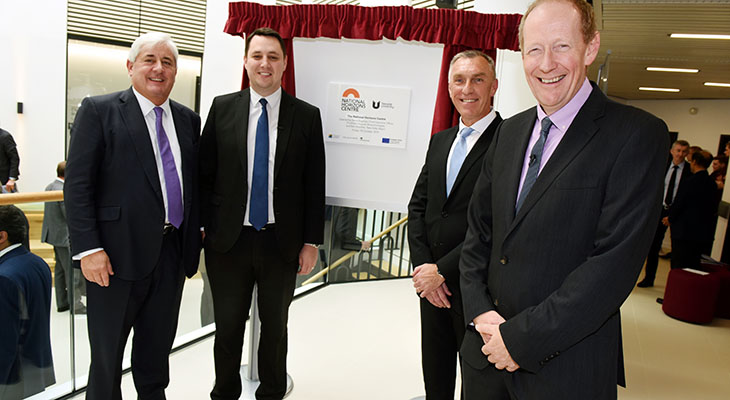 This internationally significant asset will play a leading role in enabling global partnerships and meeting the demands of the Government’s Industrial Strategy, through catalysing talent development and providing a platform for engagement between research, teaching and industry.

With government plans to double the UK bioeconomy from £220 billion to £440 billion, the National Horizons Centre will deliver the technical and management skills required, and drive innovation and knowledge development critical for growth, jobs creation and the future prosperity of the Tees Valley and the UK.

And the work at the NHC is already moving forward at pace, underpinned by collaborative partnerships with sector heavyweights, including FujiFilm Diosynth, GlaxoSmithKline, Waters and the Centre for Process Innovation. Such integrated working with business ensures a firm foundation for the development of industry-relevant training, along with generating a pipeline of work-ready graduates.

The strategic relationship with Waters Corporation has also led to the NHC being equipped with some cutting-edge equipment including a mass spectrometer that will allow industry partners to make advances in targeted drug development: one of only a handful of laboratories in the world to possess this capability.

Teesside University Vice-Chancellor and Chief Executive, Professor Paul Croney, said: 'Our ambition is to bring together academia and industry to drive forward innovation that boosts the regional and national economy. The flagship National Horizons Centre is already proving to be game-changing for the biosciences, big data and digital technology and represents a significant investment as part of our ongoing campus masterplan.'

The National Horizons Centre attracted the single biggest investment by the Local Growth Fund, with £17.5m of support secured via the Tees Valley Combined Authority, along with additional funding from the European Regional Development Fund and Teesside University.

The state-of-the-art National Horizons Centre will allow us to be at the forefront of key developments within the hugely important bioscience sector.

Minister of State for Local Growth, the Rt Hon Jake Berry MP, said: 'When I broke the ground on the site for the National Horizons Centre in February 2018 with Mayor Ben Houchen and Professor Croney, I said, ‘this is the Northern Powerhouse in action because this centre will not only be of regional importance but will be a nationally significant asset too’.

'So, I am delighted to see that the centre which we have supported with £17.5m of Local Growth funding is now officially open.

'The Centre brings together experts from industry and academia to provide specialist training and education for the world-leading UK bioscience sector. It is a centre of excellence, providing the sector with the knowledge, skills, talent and facilities to support its development and growth.

'Through investments such as this, and others across the Northern Powerhouse we are ensuring that every community has the support and investment that it needs to flourish as we leave the EU on 31 October.'

Tees Valley Mayor Ben Houchen said: 'Our region has a rich history of innovation, research and development and the state-of-the-art National Horizons Centre will allow us to be at the forefront of key developments within the hugely important bioscience sector.

'Our mission is to create more high value jobs of the future, and that’s why we invested £17.5million in making this critically important research centre of national significance a reality. This is one of the latest examples of Tees Valley’s ambition to lead key sectors.'

The £22.3 million investment in the National Horizons Centre is part of Teesside University’s ambitious campus masterplan, which will see £300 million transforming its estate to continue to provide an outstanding student and learning experience.

What lies behind the glass of Teesside University's new research facility in Darlington?
Northern Echo, online, 19/10/2019
From the outside it is a modern university building not unlike many others; plenty of glass, sharp angles, and a few saplings dotted about outside indicating its infancy. But inside...

Leading the way at research facility
Northern Echo, p.19, 19/10/2019; Darlington and Stockton Times, p.32, 25/10/2019
From the outside it is a modern university building not unlike many others; plenty of glass, sharp angles, and a few saplings dotted about outside indicating its infancy. But inside...