Judyta’s time at Teesside has led her to her dream job as a filmmaker.

I’ve made great connections for the future which is important in this industry. It’s helped me by opening my eyes to the opportunities there are. 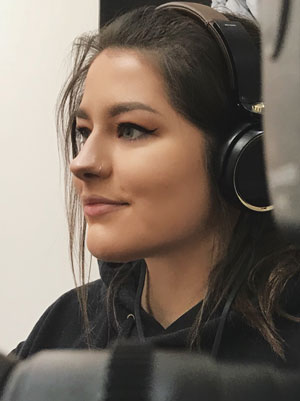 What made you decide to study on a higher education course at Teesside?

I’ve always wanted to get into film and television and it seemed like a great opportunity to gain experience and meet new people interested in the same things as me. It was also the perfect distance from home, so if I needed any help it was only a train ride away.I did a lot of research on different universities, and after a few open days and interviews, I decided Teesside was the right choice for me. It had great equipment and many facilities available to students.

What have been your favourite modules?

One of my favourite modules was Lights, Camera, Action: The Language of Film, we learned about older films and how they impact cinema now. I enjoy learning about the history of cinema I find it really inspiring. My favourite module was in my third year where I travelled to Poland and made my own documentary. It was an amazing experience and I gained so much confidence from it, it opened doors for me, taught me to be independent and rely on my skills. I also did a work placement at the university in my second year. The best thing about the course was that I made films for real companies outside the university, which was useful because it helps you to understand what it’s like working for a client.

What do you think about the campus and the services?

The campus is great and it’s always been nice to hang out in the Students’ Union with my friends. The library has been an amazing resource and I spent a lot of nights there writing essays, it‘s comfortable with coffee, snack machines and comfortable seats. I also loved that the gym was right next to the library so when I needed a stretch or to clear my mind I could always go there and relax.

Have you stayed in University accommodation?

In my first year I stayed in Woodlands Halls and I’m glad I did because it’s daunting when you start university, but sharing accommodation with other first years made me more comfortable and it’s where I met my first university friends. My social life was good, I met a lot of people and took advantage of all the clubs around the area. I’ve always lived close to the shops too, which has been awesome when doing food shops.

Did the offer of bursaries or sponsorships attract you to apply to Teesside?

Having financial help was great because it meant I could focus on my studies and not worry too much about being able to afford food. And I had some money to spend on occasional nights out with friends, which I think is important when you’re studying. It also meant I could put some money towards my course, which was useful especially in third year when I filmed my documentary, The Run.

What are you doing now?

I’m a filmmaker at Ithica Films and I also focus on marketing and posting on their social media. I’m also gaining experience of working to a brief for clients and my knowledge of cameras and editing software is improving which has given me so much motivation. It’s an amazing experience so far and I feel so lucky to have found a job I’ve always wanted. It’s confirmation that I made the right decision to study film and television. I’m excited for the future at Ithica Films.

Would you recommend your course?

Definitely, you can take advantage of individual tutor sessions to keep track of your work and make sure you’re on the right page. I learned a lot from my tutors who helped me in my second year when I was struggling. I experimented with different cameras and made my own film, to establish what I was interested in. I’ve also made great connections for the future which is important in this industry. It’s helped me by opening my eyes to the opportunities there are.