David is preparing for an exciting career in the aerospace industry.

My course will certainly help me along my career path. 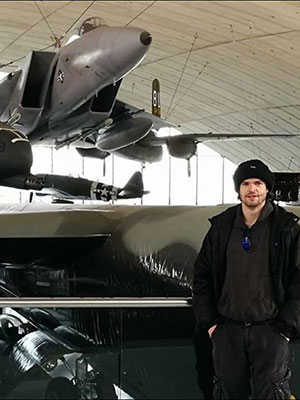 What made you decide to study aerospace at Teesside?

I decided to change career paths due to the industry I was in becoming obsolete. I wanted to get into engineering so a degree was essential. I’d known about Teesside University since I was young as my mother also studied here. Thanks to some online research and studying the University’s prospectus I decided Teesside University was right for me. Accommodation was also much more affordable at Teesside than at other universities.
I chose to study aerospace engineering because I’ve always been fascinated by planes and helicopters, particularly how they actually manage to fly. I also felt that aerospace engineering would lead to great career prospects.
One of the best things about my course has been my lecturers – their supreme understanding of their subjects and their ability to pass their knowledge on has been brilliant. My favourite module so far has been Aeroengines and Rocket Science – it’s really expanded my knowledge.

What do you think of the University’s campus?

I am very happy with the campus, especially how the whole campus is all within a small area. Compared with other city centre universities, which can be quite spread out, everything is within a few minutes’ walk.
The services offered across campus cover practically every need a student could have. I haven’t used the snooze rooms yet but I’ve used most other facilities. Student services have been immensely useful to me along with the careers service.
There’s also plenty of financial help. Financial support is available if you get into difficulties – I didn’t use this but it’s reassuring to know it’s there. I qualified for a reduction in my tuition fees for my foundation year. There are also lots of new scholarship options.

What’s your social life been like, and what have you been up to apart from your studies?

Since I started University my social life has become a lot more varied, partially due to living with other students and also due to my involvement in some of the University’s societies and clubs. I was previously a member of the kung-fu club. As well as the physical training it involved arranging rooms and organising instructors, it was lots of fun.
I’m also a member of the real ale society which I got involved in mainly for the social aspect; the members are a little older than lots of students here, and I feel like I fit in with them well. The cost of living here is good and certainly lower than many city centre universities.
I’ve been a student ambassador during my time at University, this has involved working for the University at a range of events on and off campus. It also allowed me to complete a three-week placement at a local secondary school where I assisted in the science department. I also took part in a pilot mentoring scheme at another local school – I found this really useful and productive.

What’s next for you?

My future career depends on whether I continue my studies to master’s level or further. I’d ideally like to be involved with space travel, possibly with the establishment of the first lunar or Martian colonies, or even in convincing others that Venus may work out to be the most hospitable option for human colonisation. Failing that career path, I’d like to be involved in the development of the next generation of terrestrial or orbital flight; I think that’d be very rewarding.
My course will certainly help me along my career path. Without a degree my employability within the field would likely be limited to technician level. If I can further my studies to master’s level it’ll help me progress towards achieving the status of chartered engineer, and this will increase my earning potential.

Would you recommend Teesside University to others?

I would strongly recommend Teesside University, partially due to the compactness of the campus and the excellent facilities available. And also because everything you possibly need is only a stone’s throw away, including cinemas, retail parks and supermarkets. Plus the massive advantage of having the North Yorkshire coast and the North York Moors so close by.