Being a sport scientist is about so much more than domain subject knowledge. 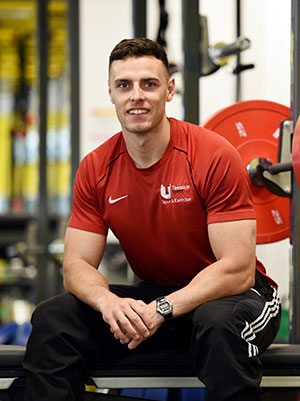 Why did you choose Teesside?

I started my four-year PhD after completing an undergraduate degree in Applied Exercise Science and a master’s degree in Strength and Conditioning at Teesside University.I actually came to university to become a PE teacher. I was good at sport and principles of science; PE was the only career I thought applied – it soon became obvious to me that this wasn't the case.I finished my PhD in October 2018, after a staggering ten years of study at Teesside University! Don't worry, you don't have to study for this long, I just got the bug for it and they couldn't get rid of me!

I loved working in the labs, running fitness tests and learning how to programme training based on the data we collected. What’s more, the people who were teaching us had worked with actual athletes – this was something that really inspired me.

Did you have any placements while at Teesside?

Yes! A lot. The master’s programme allowed me to get involved with several athlete support projects both internal and external to the university, such as the Elite Athlete Scheme, Tees Valley Future Champions, the FA Girls Centre of Excellence, the Scottish Exiles Rugby Union programme and Manilla Cycling Club.After completing a one-year internship at premiership rugby union club Newcastle Falcons, I was offered the chance to work with Nottingham Rugby. This acted not only as a further development opportunity, but also the chance to collect real-life data for my PhD research and then apply it with the athletes I was working with.

How important were your placements?

These experiences were extremely valuable and just as important as the project work. Being a sport scientist is about so much more than domain subject knowledge. Being able to successfully coach and apply sport science principles in the real world relies on the ability to communicate, foster professional relationships, adapt to different situations and exercise your own personal philosophies.

What have you done since graduation?

After spending a year with Hartlepool United as Head of Sport Science and Medicine, I now work as a Sport Scientist for England Rugby League and Great Britain Rugby League.