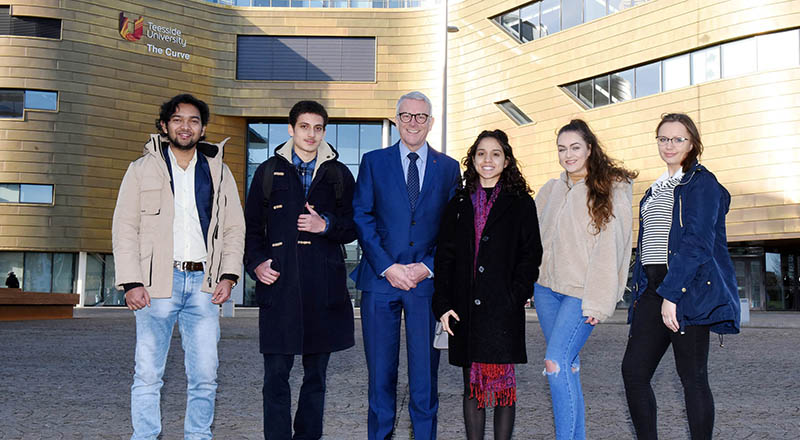 International students have rated Teesside University number one in the UK for overall average student satisfaction, according to an influential survey.

The International Student Barometer (ISB) is a global survey which gathers feedback from international students across the world in a wide range of areas.

A total of 183 universities worldwide took part in the ISB, with the results revealing high levels of satisfaction among overseas students studying at Teesside University, with more than 850 Teesside students completing the survey.

Teesside University was placed top in the UK for overall average student satisfaction, with the ISB ranking it first among 42 participating UK universities.

The University was also ranked top out of 41 participating UK universities for its Students’ Union.

It was top in the UK for a number of other areas, including value for money, careers advice, its library and financial support.

Globally, Teesside University was also ranked second for its campus buildings and clubs and societies.

Teesside University positions itself as an international university with a global network of partnerships and it attracts high quality students and staff from across the world.

Students from over 100 countries have graduated from Teesside University and it has successful partnerships with universities across Europe and beyond, including leading institutions in the Czech Republic, Spain, China, India, Malaysia, Sri Lanka and Singapore.

Those who completed the survey were automatically entered into the International Student Barometer 2019 prize draw, with the winning students from Teesside University recently receiving their prizes.

We are delighted to see such positive results in the International Student Barometer and pleased that so many students have engaged and taken part.

Rushikesh Patel, from India, won £100, while Hasiel Sarsby, who is originally from Honduras and Joanne Patel, who grew up in Dubai, both won £50 after submitting their feedback and being randomly selected from those who took part in the survey.

Rushikesh, who is studying MSc Project Management, said: 'My time at Teesside has been an amazing experience. It is my first time studying abroad, so my expectations and standards were high. Everyone is really friendly and helpful.'

Joanne, who is studying MSc Forensic Science, said: 'The University has a really good reputation. The people here are very friendly and there is always a really quick response to any requests for support.'

Dr David Bell, Pro-Vice-Chancellor (International), said: 'We are delighted to see such positive results in the International Student Barometer and pleased that so many students have engaged and taken part.

'The feedback demonstrates that we are moving in the right direction and we will continue to invest and to improve our offer to ensure that Teesside University remains a positive choice for students from around the world.'

*Based on the views of 854 Teesside students within a global survey response of 179,950 students. More info at www.i-graduate.org/about-us/clients/. Verification data on request, email info@i-graduate.org.

Find out more about studying with us